How Caffeine May Be Affecting Your Sleep

We all know that caffeine is a stimulant; I mean, that is the purpose of consuming it for most people, right? It has energizing effects and promotes alertness for most people. While it is naturally found in many plants, such as coffee beans, tea leaves, and cacao pods, it is also synthetically produced for use in products such as sodas, energy drinks, and even medication.

Caffeine is absorbed through the small intestines, which means it is producing its maximum effects between a half-hour to an hour, depending on the individual. Once it is absorbed, the body disperses it throughout the body in which it crosses the barrier of blood and brain.

Once the caffeine has reached the brain, it blocks the adenosine receptors; adenosine is a chemical that our brain produces to promote sleep. This chemical is constantly being produced while we are awake. The longer we are up, the more the brain stores causing us to become more sleepy as the day goes on. When we consume it during this time, it hinders this process, keeping us more alert. 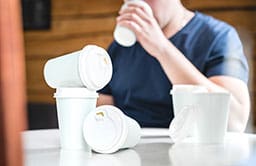 Because caffeine can delay the onset of sleep, the efficiency of our natural sleep cycles become interrupted and, in some cases, cause caffeine-induced sleep troubles. Slow-wave sleep is the stage of sleep when we get our most restful and deep sleep that helps us wake up feeling refreshed and alert.

This stage is often disrupted or reduced due to caffeine consumption and can lead to sleep deprivation and fatigue, which can also significantly affect the brain’s ability to learn new information, retain problem-solving skills, and cause problems with memory. Sleep is not only affected by the consumption during the hours closest to bedtime. Studies have shown that even consuming caffeine up to 6 hours prior to going to bed can disrupt sleep cycles.

Though caffeine is often used to help people wake up in the morning, it can cause more harm than good for those running on long-term sleep deprivation. Although it can provide bursts of energy due to the stimulation of the nervous system, it is no substitute for getting quality, restful, and restorative sleep. The effectiveness of caffeine varies widely based on the individual and the amount that is consumed.

For those who are using caffeine to boost them out of fatigue or fog, it can have some benefits, but for those who are already functioning with a stimulated mind and acute alertness, caffeine can actually cause high levels of anxiety and restlessness.

While there are short-term benefits to consuming caffeine, overconsumption can lead to insomnia and other sleeping disorders such as Obstructive Sleep Apnea (OSA) which is often associated with caffeine found in sodas.

If you find that you are not getting a good night’s sleep, are waking up periodically during the night for no apparent reason, or are waking up more fatigued than when you go to bed, it may be a good idea to reevaluate your caffeine consumption.

Please complete the following form to schedule your free consultation. Your appointment will be confirmed by phone by a member of our staff. Thank you!

Please complete the following form to schedule your screening. Your appointment will be confirmed by phone by a member of our staff. Thank you!

Please complete the following form to register for the free seminar on Neuropathy, Thank you!

Please complete the following form to register for the free seminar on Regenerative Medicine, Thank you!